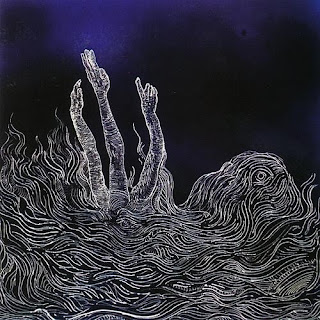 On occasion, a scene will vomit up a deranged, screwed up band full of strange strange people who will make strange, strange music that will make you question where the line between pointlessly edgy or insane and ingenious is. Or make you question if there's even a line at all. On an even more rare occasion will that band will succeed in mocking the line between vulgar and brilliant and not just end up on the overly-crude side of the line. I believe that Wolf Eyes is one of those band who can successfully balance the two.

Formed in Hell Detroit in 1996 the group wasn't actually a group. It was just an outlet for Nate Young's solo career. But from 1998 to 2000 three other people joined the group. If I had to classify this group I would probably call them Shitgaze actually, though they're more like Shitgaze's deranged cousin. By that I mean the band offer a much harsher sound than a lot of other bands categorized as Shitgaze. You could almost describe them Power Electronics, kinda similar to Whitehouse in a way, but they still have that Noise Rock influence to them that makes them just barely stay in the realm of Shitgaze

This album, Always Wrong, was released in 2009, and had been a relatively unknown release. This is likely due to the fact that Wolf Eyes is one of the most prolific group I've ever seen. While not as insanely dedicated as Merzbow, since 1996 the group has released a myriad of albums, totaling at well over 100, and all the members of the group have a countless amount of side projects or other bands they participate in. This album was one of their darker ones by far. It even sounds reminiscent of Swans during their early years.

The album gets to an electrifying start with "Cellar." Please excuse the shockingly bad pun, the song is truly good at foreshadowing the rest of the album. It starts with a buzzing sound and then the discomforting, pained vocals come it. Only to be obscured by the crashing noise and the other glitchy sounds. The singing really sounds like he's in his death throes, and it's as horrifying as all the dark, foreboding noise surrounding him. The end of the song sounds only what I could imagine to be someone sticking a microphone in an oversized electrical socket. The next song, "Living Stone" plays a more eerie note, the noise isn't very intense at the beginning and the vocals are quite subdued with occasional jolts of noise going on and off. The 3rd song, "Broken Order" brings us back to the Harsh Noise aspects of the album, starting us off with this malicious wall of noise with the enraged vocals which we can't really even make out, we can only assume he's pissed off and talking about things pissed of people talk about. This song really just relentlessly pummels your ear drums into a fine pulp. When that song finishes going to town on your ears we get to hear a gentle buzzing in "Pretending Alive," with some eerie screeches thrown in over and over, this is one of the songs where you can just tell it's going to get really loud really fast, but you still never see it coming when it does finally come. But this song is a bit of a curveball in the sense that it actually just get's gradually louder. The screeching just slowly intensifies and becomes more brooding and drawn out as some other sounds are thrown in to this wonderful collage of noise. The song never feels like it actually climaxes though and it ends on a bit of a sour note. In "We All Hate You" we are greeted by what appears to be a recording of Megatron letting out a fart on loop with some strange, yet fitting instruments throw in. Then the vocals, this time lisped, come in. Unlike Noise bands with singers, like Whitehouse, this singer can display emotions other than pissed off. This song has a much more brooding feel to it. With the slow vocals almost reminiscent of Michael Gira's singing in Swans, but over a lot more hectic and noisy instrumentation. The next song, "Always Wrong" is a shorter track, and the harshest. The singer screaming as hard as he can over a wall of just pure incoherent noise. It's quite a twisted, but at the same time so interesting. Almost like a train wreck, except the album isn't bad in the slighted. The 7th and final track is called "Droll/Cut the Dog." It's certainly the slowest and quietest song on the album. Wolf Eyes can give a really eerie and disturbing feel to their music, shown especially here. The singer comes in and starts speaking some malevolent sounding poetry over this field of already disheartening static and caustic hissing, really a beautifully eerie way to end an album.

This particular album was relatively short, clocking in only at 30 minutes. Regardless, Wolf Eyes is a band I would certainly recommend to fans of Harsh Noise or Power Electronics and Always Wrong is the album I would certainly recommend that you start with. And perhaps even fans of No Wave who enjoyed bands like Swans and want something different and harsher. Or maybe veteran fans of Noise Rock who keep craving something harder. Really this album fits quite a few types of tastes, so just check it out and see what you think of it yourself.