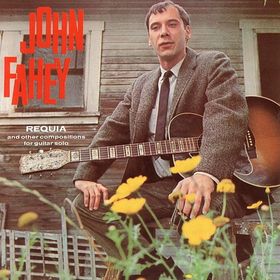 John Fahey is an American Guitarist, famed for blending a series of styles in order to create "American Primitivism", and really re-popularized the guitar as a Concert Instrument rather than just fodder for ever unimaginative blues and rock'n'roll band, and in my mind, is one of the most interesting musical figures of the later part of the 20th century.

Requiem is Fahey's earliest implementation Musique Concrète, directly following The Great San Bernardino Birthday Party, which was when Fahey first started manipulating tape and working with different effects in order to create often bizarre and psychedelic soundscapes. Musically, it still retains retains Fahey's whirlwind blend of sounds, from classical compositions, to traditional country fingerpicking, to various types of folk music, and especially pronounced on this album - the blues. On opener "Requiem for John Hurt", Fahey's tribute to the then recently deceased Country Blue legend Mississippi John Hurt, Hurt's influence, which had been felt throughout his discography thus far, is even more evident throughout the song, and it really resonates with the listener - respect for both the deep admiration he had for Hurt, and the way in which he could so seamlessly blend Hurt's Country Blues' style with so many other different styles and ideas. Fahey's extremely eclectic style still feels fresh and unique to me, and it's this quality that really makes his music sound timeless to me. "Requiem for John Hurt" segues into the gentle, plodding melodies of "Requiem for Russell Cooper", which is by and large, a standard Fahey track. But what strikes me about the piece is this: the way in which the beginning mirrors the ending is almost symbolic of the way in which Requia is an album that continually reflects on the past, and retains a powerful emotional message, while looking forward to the future in terms of experimentation and innovation.

The centerpiece of this album is the 4-part "Requiem for Molly". The Musique Concrète elements are really prevalents, with Fahey utilizing samples played at odd speeds undercut with military-esque musical segments, conversation and organ pieces that slow down and stutter like the tape recorder is falling to shambles. The little snippets of sound that underscore Fahey's guitar playing make the piece feels so beautifully odd at times - it's like a child collecting various treasures and other tidbits from playing in the garden and assembling them on a giant collage - it really makes the piece sound so cobbled together lovingly, all these wonderful little samples and ideas coming together in one sound collage piece, coupled with Fahey's magnificent guitar playing, much in the same way Fahey blended so many disparate styles in order to create American Primitivism in the first place. And also importantly, it showed what was to come on an album like Womblife, showing that even almost 30 years down the line, Fahey was able to keep the ideas and the spirit of his early music fresh and alive, which is a true testament to what an amazing musician he is.

While this might not be the best place to start for people new to Fahey, Requia is a powerful display of how forward-thinking and inventive a musician John Fahey was, and a true masterpiece from one of the most innovative musical figures of the latter half of the 20th century