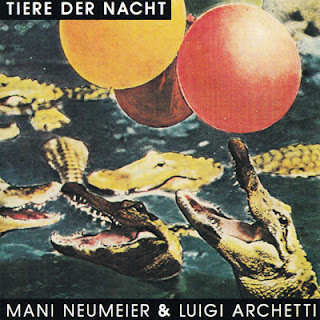 Tiere der Nacht (literally "Animals of the Night") was a band that could probably best be described as Krautrock (albeit Krautrock is more of a scene than a genre, I've always considered it a genre). The band consisted of  Mani Neumeier and Luigi Archetti who together released 5 albums as Tiere der Nacht from 1991 to 2005. Before Tiere der Nacht, Neumeier led successful Krautrock band Guru Guru, Luigi was also a member of the band at one point, but he also had a pretty strong solo career. The duo's experience really shows in this hidden gem.


The album Hot Stuff is the bands very first release, being released in 1991 it's pretty late onto the Krautrock scene which started in the late 60's/early 70's and went on through the 70's. The album also isn't like most Krautrock albums in the sense that all of the songs are short. In fact the first song is the longest, and it clocks in at only four minutes and 24 seconds long, very contrary to most Krautrock songs which usually have a songs that are upwards of 10 or 15 minutes long. I actually quite enjoy the shortness of the songs, sometimes long 20 minute songs just feel tedious to get through the entirety of them. The short songs on this album feel more to the point and less focused on the wankery that can sometimes happen in Krautrock albums. Although the shorter songs can also be a problem cause it always makes me wish it were just a bit longer, like the song "I Still Love You," I think it would have been an even more interesting track if they had just fleshed it out a bit more. Even without the fact of song length, this album seems really strange relative to all it's peers, the instrumentation is very interesting, using a lot of instruments I don't see a lot in Krautrock, it's actually kind of surprising I don't see that many, or really any, brass instruments in Krautrock it can really suit it well. At one point in the album I can swear I even hear a kazoo. There's a bit of interesting production quality on the album as well, there's a nice attention to detail in a lot of the songs. There's even a bit of singing on the album, for the most part it's just crazed sounds that are half-screaming, half-singing, and for the most part fully-indiscernible. Unsurprisingly Neumeier's drumming is grade A on this album, it really comes as no surprise, considering all the exposure he got from drumming for Guru Guru, Archetti does some really interesting things regardless of what instrument he's on too. I guess these things just happen when you're a veteran Krautrock musician.

In the end I really must say this album was a lost classic, in my opinion it can hold its ground against bigger and more popular acts like Can. I really wish these guys would have gotten more attention at the time, they released some very interesting music. Unfortunately most of it is really hard to come by, I have only been able to find 2 of their albums. I may put some effort into finding more things by these two because their music is really great and I'd love to share it with all of you. I'd certainly recommend this album to any Krautrock enthusiast who wants something a bit different.