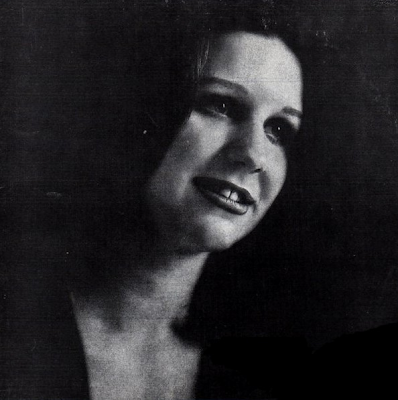 Patty Waters was along with Yoko Ono, Jeanne Lee, Joan La Barabara, and Shelley Hirsch one of the major pioneers of expanding the vocalist's vocabulary into an endless cacophonous world of abstract sadness and destructive elegance. After being noticed and praised by Albert Ayler in the early 60s, Patty Waters was introduced to the experimental jazz label ESP thus releasing "Patty Waters Sings", a two-faced traitor that surrounds the listener in an abstruse relationship of neediness and darkness.


The album starts out with the classic "Moon, Don't Come Up Tonight", a minimal and desperate jazz prayer that soothes itself with Patty's delicate singing. The album continues this way for 6 tracks, all of them clocking under 3 minutes (most of them under 2) and all of them evoking sentiments of depression and polished angst. The last track of this album is where Waters shows her true face; "Black Is The Colours of My True Love's Hair" seems to reject the calmness and conformity of the last 6 tracks' mood, it utterly destroys the rest of the album almost as if the vocalist were a different person. It starts out as  aerial and as relaxed as the past 7 tracks but with some dark undertones that haunt Patty's parsimony. Tenebrosity starts to take over at 5:55, Patty sounds like she's being murdered by her own panic and starts chanting "Black" ever so scandalously. The next 7 minutes bounce back and forth between vocal violence, resentful piano playing and Patty chanting "Black, black, black, black" over and over again as if she were exploring and reinventing the definition of this word. By the end of this album we can't ever look at the cover the same way again.

"Patty Waters Sings" is a very dramatic album that is essential for any lover of vocal music and avant-garde music.