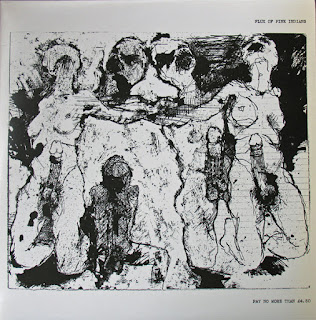 Flux of Pink Indians were an Anarcho-Punk band formed circa 1980 in England. Their relatively short career  which ended in 1987, saw the release of 3 politically fueled, noisey Punk albums. The band was previously known as The Epileptics (and later Epi-X after some British association regarding epilepsy started whining about their name) a couple years prior to changing their name to Flux of Pink Indians. They were certainly one of the better bands to come out of the Anarcho-Punk scene in the early 70's/late 80's. Anarcho-Punk itself helped shape other popular genres such as Grindcore or Crust Punk. It also helped in the foundation of Folk-Punk, which in turn shaped Indie-Folk as it is today. I've always found it interesting how genres that seem so different, like Anarcho-Punk and Indie-Folk, can still end up being very related.


The album itself has an almost humorously obscene title, The Fucking Cunts Treat Us Like Pricks, the second LP of this 2 LP album was called The Fucking Pricks Treat Us Like Cunts. The album art, is, well, as you can see, even MORE obscene, obscenity is clearly what they were striving for, and they did a great job. This album, along with albums from other from Anarcho-Punk bands such as Crass, were even banned by some retailers for simply being too vulgar. The first song, "Punk" begins with some, not Punk, but Noise, and then turns into an Anarcho-Punk tune with a bunch of Noise aspects, it's quite interesting. It's actually a very noisy album, certainly bordering Noise Rock, with its large amounts of feedback and looping. Another thing to note is that this album has a few songs that are rather long, the last song is 10 minutes long, pretty atypical of a lot of punk music. The longer songs like "Mind Fuckers Fucking Minds" seem to end and begin again. All with noisy droning going on in the background. I know I'm using that N word quite excessively, but it's so prominent, I reall like how the album experiments with noise, I always like seeing Noise and Punk come together. "Hard Sell" mostly consists of these foreboding drums over noise and sampling from some kind of movie or show or something. It becomes more normal about a minute and a half in, not to imply that the beginning wasn't interesting though. And this song too abruptly cuts out, this time to more sampling. And just as sudden as the sampling came, it goes and the song is back. I admittedly wasn't a great big fan of that part it certainty was not so subtle on their part. "Mickey Tuneoil" is a good song to show the influence Anarcho-Punk had on Grindcore, it sounds exactly how I'd imagine a very very early precursor to Grindcore to sound like. The next two songs, "Desire" and "Blood Lust Rite" are the standard formula for Flux: playing over sampling from strange, strange sources, and great frantic, and abnormally noisy Anarcho-Punk. "The Falklands War" transitions right in from "Blood Lust Rite," the beginning is really strange, it's relatively calm talk-singing (the proper term is apparently Sprechgesang, but let's be honest, that sounds really silly)  in contrast to the standard crazy Anarcho-Punk playing with it, there are also occasional squeals of a high pitched noise. It's almost eerie. A good bit of the 7 minute long song goes on like this. The lyrics, which through all the songs are quite hard to make out, are a little easier to understand here, the song is, obviously, sung in protest of UK's war with Argentina over the Falkland Islands. The strange thing about the next song, called "Punk," just like track one, is that it takes up the entirety of Side B, even though it's only about a minute and a half long. I'd like to own an original pressing of the album so I could see what that's about, I may one day, since I am quite fond of this album.

Side two begins with a much calmer song, "Life We Make," a bit of a mix up, as it's quite calmer than a lot of the album. The next track, however, called "Trouble in the Heart" has an intro that sounds like a blender. A fucking blender. After the intro there's standard Flux, this time with a saw blade like sound in the background. Quite a strange track. "The Sun" is another song like "Mickey Tuneoil," in the fact that it sounds like very very early Grindcore in a sense. "Shadow of Abuse" follows suit with that whole sound, albeit this song is a lot noisier than the previous song. I really must say I love the noises on this album, it gets so cluttered and so very panicked and layered in most of the songs. "Very Funny" actually isn't that remarkable, relative to the rest of the album that is, certainly nothing bad, just not special. Then finally we reach side D, with the 10 minute long giant name "Cure For The Coprlite." I'm not entirely sure what a Coprlite is, google leads me to believe that it's a misspelling of "Coprolite," which is fossilized poop. That seems pretty fitting compared to all the other song titles and even the album title itself. This song begins as another very angry, leftist rant at the government, it grows increasingly fervent as time goes on. Until the song comes to an end at about 5 minutes in, percussion made from what sounds like a mallet hitting something brings the song back, with a lot more of a Post-Punk song, which seems out of place, but they do manage to pull it off well, thinking about it, I'd actually like to see more Anarcho-Post-Punk. The song develops back into just more Anarcho-Punk shortly anyway. Towards the end it becomes some quit banging noises which bring the album to a close.

If I wanted to live in America
I'd get off my arse and go live over there
Posted by spillway at 10:40 PM