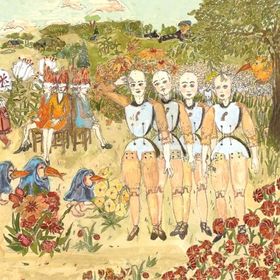 Cerberus Shoal started life as a post-rock band, before morphing and becoming even more tripped out, going from experimental rock to bizarre psych folk, and then settling into their avant-folk/freak folk mould. "The Land We All Believe In" is, without a doubt, their magnum opus, and one of my favorite folk albums of the last decade.


Cerberus Shoal leads you into their master-piece with a slow, steady drone that builds before breaking into gentle guitar rhythms and a beautiful entrancing female voice. A male backing vocalist joins in for the rest of the track, which is relatively short, and far more orthodox folk track then the rest of the album, but it serves as a inviting entrance into the hyper-inventive world of their music. This segues into the next track, Wyrm, which is far more unexpected. It is far longer, and the beautiful, dulcet female is voice is gone, with a man sing-shouting in a foreign language, and features far more angular electric guitar parts, before lapsing into a more gentle ambience. From there, the track builds around a repeating accordion riff into a cacophony of electronic blips and whirrs and sounds right out of a maniacal, schizophrenic children's cartoon, backed by a buzzing noise that remains in the background, before simmering down to the simple accordion and the man sing-shouting. The next song starts off with an EDM-esque rhythm, then the extremely odd-sounding, androgynous voice comes in with a female backing vocalist. The song occasionally breaks down into chaotic instrumental spasms, but it serves to break up the more traditional song structure, and it certainly keeps your attention. The song breaks off into an odd carnivalesque sing-song with a very unorthodox sounding male singer.
The rest of the album is made up of three long tracks, but there's more than enough variation in all three tracks to keep your attention. The ethereal, ghostly vocals on "The Ghosts are Greedy" create a haunting atmosphere that suit the track perfectly. The instrumentations, especially the creeping violins. Once again, the track breaks down into a sea of crackling fuzzy noise, this time with a deranged sounding singer spitting venom over it. The last 4 minutes of the track are simply beautiful, with the mellifluous female singer returning. Junior is a slow start, but it develops into a great track, complete with unorthodox percussion and rambling psychedelic guitar parts. The song passes through another sea of distortion into a mellow childish singalong that ends the track on a whimsical, happy note. The closer serves as a perfect bookend for the album, managing to encapsulate everything that makes this album great - the odd yet strangely entrancing singing, unorthodox but extremely wild and passionate instrumentation, the energetic carnival-esque atmosphere,  the varying tone and pace, menacing spoken word sections, sections of bleeps and bloops - into one single track, and really ends this album in a truly engaging way. My one gripe is the extended section of silence in the middle of the track, something that is a real pet peeve of mine, and happens far too often in albums for my liking. Overall, I loved this, a wildly inventive, experimental and psychedelic folk record, highly recommended.