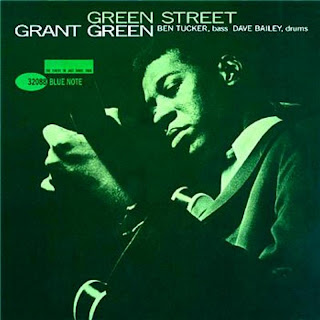 Grant Green is a Jazz guitarist who, unlike most of his kind, derives his influence and method of playing from horn players (namely Parker and Davis) and not guitar players. This, and the fact that Green was a superb blues interpreter, makes his playing indistinguishable. It is rare that a guitarist avoids chordal playing and instead uses a kind of single-note linearity, but Green's technical skill makes it work. To me, a lot of Green compositions and performances would not sound very different if played by a trumped. More importantly, Green's playing is just cool. It's the perfect soundtrack for a lazy afternoon-- and Green Street is one of the albums that better reflects this characteristic.

With no pianist, saxophonist, or organist, Green Street is Grant Green and his rhythm section (Ben Tucker on bass and Dave Bailey on drums) alone, and they perform one of the best records Green recorded for Blue Note. The small ensemble allows each player to play with no wasted notes and plenty of soul. Green's playing is top notch on this album-- "'Round About Midnight" showcases Green's skill at performing ballads in guitar, using vibrato and not many decorations and embellishments. Tucker gives a great performance on "Alone Together" with bass filler and clips from Bailey's drumming. "No. 1 Green Street", with its easy-groove, is classic, cool Green at his best. "Grant's Dimensions" might have great key switches and chord play, but it is Tucker's and Bailey's solos that make it a superb performance. Lastly, "Green With Envy", an adaptation of Horace Silver's "Nica's Dream", is a great ten-minutes of improvisation and key changes.

Overall, Green Street stands among one of the best Green Blue Note records. It's one of the quintessential albums that prove that Green did not need a full band-- a trio was enough for him to showcase his talent.