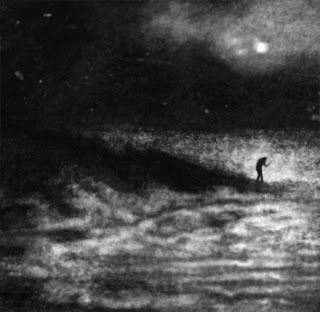 There are two bands with the name Trist, the more famous one a depressive black metal band from the Czech Republic, and this one, an ambient black metal band from Germany. It was formed by Tristan from Lunar Aurora, a black metal band that received quite a lot of praise for their 2012 album Hoagascht. You can draw lines between Lunar Auroras sound and the sound that Tristan creates on Willenskraft, both are ambient black metal bands that rely heavily on atmosphere and a sound that is eerie, and depressive rather than aggressive. Of course there will always be a certain level of aggression in black metal, Trist is not an exception, but with this album the aggression is internal, a battle against oneself.

The music itself is a mixture of ambient noise and black metal, not always mixed in together but separated so that you get a few moments of each. Usually I would find a strong separation between sounds quite annoying, but because the atmosphere stays the same throughout the album it works. The ambient parts really bring the sound that the cover art promise, desolation by a dark ocean. At some parts there are whispers, barely there, the creaking of boats and the ocean washing up on the shore.  When black metal parts kick in, the focus goes from the surroundings to a more introverted and tortured sound. Wordless vocals that to me perfectly embodies an internal struggle, maybe the sort of feelings a lonely man by an angry ocean would have.

It’s hard to say who would like this album, but if you’re in any way a fan of bands like Paysage d’Hiver or Darkspace then this is a must. If you do give it a listen and enjoy it, then I would also recommend Hin-fort, Trist’s second album.

Willpower
Posted by Madonna at 3:18 PM