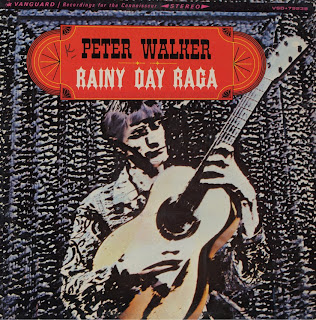 1966 was a very exciting year for music. Frank Zappa's Freak Out!, Bob Dylan's Blonde on Blonde, The Beach Boys' Pet Sounds, The Beatles' Revolver. The pop-folk explosion was dying out from the onslaught of the British invasion, but the remaining survivors went with the changes. Home to this sort of transitional period was none other than Vanguard Records, originally the folk label of the Greenwich Village scene. Psychedelia and experimentation became more and more prominent on this label, with artists such as Sandy Bull and Country Joe & The Fish. My personal favorite from this period and from the year 1966 is Peter Walker's Rainy Day Raga.
Peter Walker is a solo guitarist, rooted in the Eastern styling of Ali Akbar Khan and Ravi Shankar. Walker creates what is stated in the liner notes as an "American raga". Walker sets each piece up with a buildup, a climax and an eventual cool down, much in the tradition of the Indian raga. Instrumentation includes Walker's guitar, a second guitar, tambourine, and a 12 string drone. Although Walker's guitar style is much akin to Sandy Bull and Robbie Basho's, this album is unlike any that either have made. It would be safe to say that the album that this most resembles is Van Morrison's Astral Weeks, which also is recorded in the improvisational, stream of consciousness style that Peter Walker interprets through his guitar in Rainy Day Raga.

On a personal note, this album is probably an absolute favorite of mine. Although it may be different for others who hear it, my body reacts to this album in a way that not very many other albums do. I always have the urge to bob my head, tap my foot or just shake my whole body to the rhythmic of the music as a reflex. I just feel that there is so much pure energy from this album as a result of each musician working together perfectly. I hope that you'll have a pleasant experience with this album like I do. If it doesn't hit you at first, I'd suggest you play it again LOUDER.