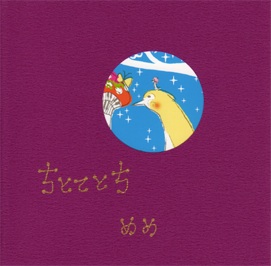 Meme (めめ) is a Japanese avant-folk/freak-folk duo formed by Sachie Yoda and Youyou. "Chitotetochi" is their first and only album and it is avant-folk in every sense of the word. Combining eccentric vocals and applying idiosyncratic instrumentation that is still faithful to both folk and avant-garde/experimental sensibilities, Sachie and Youyou have given birth to an original and compelling folk statement that will continue to caress listeners from future generations.

The oddity is immediate, without any delay this album shows its weirdest facet. The album title is pronounced  and degenerated ever so hesitantly and humorously, Sachie and Youyou enter this abstruse vortex of dadaist humour that is uncanny yet enchanting.The second track;"Sakki Made Naiteta No Wa Dare Da" is a delicate treaty between guitar, voice, theremin (a constant concept in this album), airy vocals and calculated pauses (another constant concept in this album)which all makes this track a soothing hymn. "Soda Sui Ukabu Tsuki" is more untraditional; bells, cascavells, theremin drones and stale guitars enroll the listener in contemplation. The next track further exposes these ideas with tenebrous vocals harmonies. The following tracks are very Natalie Rose Lebrecht-esque in the way that the vocal melodies are tackled with elegant vibratos and in the way the instrumentation complements the vocalisation with dark irony. The album takes a more traditional turn at this point, Sachie's lines are notoriously influenced by Latin-American melodies that are probably Argentinian or Brazilian. "Ikko Eran de" is a definite album highlight, especially when it comes to the melancholic and peaceful guitar work. Yoda is sweetly nostalgic in this track, her verses are delivered oh-so warmly and heartfelt, easily the album's  most vulnerable song.
"Chitotetochi" is a testament of tradition, a necessary one that isn't afraid to innovate and expand; yet innovation is effortless and natural when it comes to Meme. This album is an unknown essential to the avant-folk enthusiast.