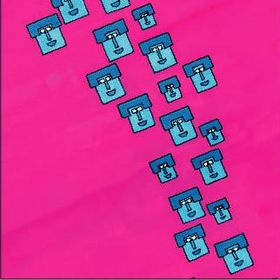 Mong Hang are an Avant-Prog group from Japan, and on their third album, Debakata, they have produced one of the most unique and unhinged avant-prog records of the past decade.

The  pounding, tribal-esque drumming on opener "Po" really sets the high-energy pace for this entire album, it sounds ritualistic and primitive - until the absolutely unhinged singer comes in, the guitar starts to sound chaotic and frenzied, and just any sense of serenity - the precedent most of the album is based on: the idea of disequilibrium .The next track is a complete change, it sounds so childish and innocent, but it still maintains the energy and liveliness I've come to associate with Mong Hang. The vocal interplay on this album is fantastic - the far cuter, childlike voices contrast so well with the deeper, far more serious and imposing voices. From garbled moans to frenetic screams, the vocals on this album are all over the place, and it's probably the thing I love most about the album, it really makes it seem so much more fun and lively, much less academic than a lot of Avant-Prog (cough*Henry Cow*cough) - it's really what sets this album apart. Some songs like "Melodion" take a break from the frantic pace of the record, providing pleasant vocal harmonies underscored with various styles of percussion, including what sounds like a steel drum, but as I said before, this album never really settles into one mood, it changes from track to track, always bringing something new to the table.
But the real centerpiece of the album is the hyperactive and chaotic "Mocowaka". At close to 8 minutes, it's the longest here. The noodling guitar playing sounds extremely odd and alien, and to me, perfectly complements the otherworldly nature of the song, from the constant breakdowns to the intensely funky tribal percussion, to the acapella section - it's a very varied track, and is full of the vivacious spirit so present in Mong Hang's whirlwind music.

Overall, this album is great - it's varied, it's full to bursting with energy, and it just seems so unlike any other avant-prog album I've listened to beforehand. Definitely a unique gem worth seeking out for any fans of modern progressive rock