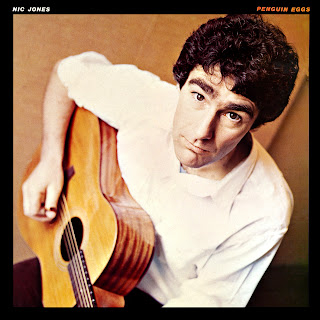 I was first introduced to Nic Jones through Peter Bellamy's Transports, an album that I shared on this blog once before. Needless to say I was hooked from the very moment I heard him sing "Us Poor Fellows". I thought he had one of the most angelic voices I had heard, and I had yet to learn about his guitar style. This album is truly a masterpiece of any sort of folk-traditional-acoustic-singer-songwriter style of music.

Nic Jones recorded a few albums of traditional ballads on the rather underground Trailer Records in the 1970's, but it wasn't until he moved to the comparatively well known Topic label, home to the best of the best in English folk music, that he let his prowess come alive. Sadly, this was his last album, as soon after he was severely injured in a car accident that resulted in brain damaged that disabled him from playing his music again.

Jones plays a percussive style of guitar, creating an odd sense of rhythm balanced between each stroke of the guitar strings and each note that he utters. The balance sounds as if it had been rehearsed over and over again, being perfected over a long period of time, while at the same time it seems extremely natural. Not to mention the production is fantastic, it makes it so every aspect of this album worth hearing; Jones's magnificent vocals, his guitar style, accompanying instruments and choruses. It may take a whole to fully grasp the scope of this album, as simple as it may seem from the get-go.

For it's out of Ballina we'll sail, fishing for the humpback whale


Posted by Banjoman Franklin at 9:22 PM