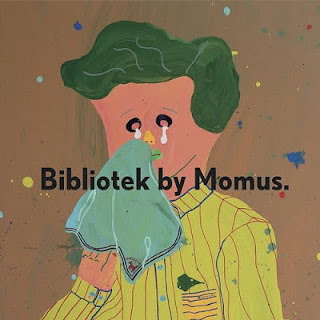 Momus is back for another review, this time for his 2012 album Bibliotek. For those of you who didn't read my first review of his debut album Circus Maximus, Momus (who also quite fittingly named himself after the Greek god of mockery) is an author and a musician, born in Scotland in 1960, he's consistently released music as Momus since 1986. Even the loss of the use of his right eye in 1997 didn't stop Momus from keeping up a pretty prolific discography and from writing for magazines like Wired and Vice. One of the great things about him is that he offers an ever changing sound, as we'll see in this album.


The album itself, Bibliotek, is much much different than his first album, Circus Maximus. Circus Maximus had this great acoustic sound whereas this album starts off with the very foreign and synthetic sounding "Erase," the song sounds very dark and the lyrics are equally dark, and the kind of Auto-Tune sounding modifier on his voice goes along with everything perfectly. I will admit the sheep in the background are pretty out of place. The whole album follows suit in a dark, more electronic, album. The next song "Lycidas" sounds a lot more upbeat and vintage but the lyrics themselves are pretty egotistical and a fine example of Momus' writing. The third song, "Dunes" is really eerie and melancholy, with Momus using the same strange vocal modification which I can't tell if I adore or hate. The production on this one is what mainly contributes to the creepy atmosphere. I love the attention to detail in the background. "Farther" has a chorus that almost reminds me of David Bowie, albeit it reminds me of David Bowie having a really bad trip. In a good way of course. Momus sings with such a depressing monotone in this song and it makes the synth-y tint to the vocals more noticeable. It's really something you're going to love or hate. It's quite interesting but sometimes I'd like to hear his normal voice which we kind of get in the next song. "Core" has a very, very, old-timey sound, on purpose actually. I must admit this song is kind of cheesy, I wouldn't be surprised if that was totally on purpose though. And as I said he does sing normally, but the catch is it's very muffled. This song abruptly cuts to eerie poetry over a strange collage of sounds, only to shortly cut back to the 50's sounding music with Momus' modern, and sometimes quite blunt, lyrics. "Southbound" offers a pretty different sound relative to the previous songs, a kind of chilled-out song with more brooding lyricism. It's also more focused on the instruments, with a strange beat I wouldn't expect from Momus, with all these additional sounds thrown in, some very interesting distortion on the guitars. "Huge" is an even calmer and lovely song. Just some slow synth, a calm, muffled beat, and Momus' solemn singing and lyrics.

At the halfway point in the album the title track "Bibliotek" returns the album to the more upbeat style. The vocoder kind of sound that goes along with the vocals faintly sounds pretty cool. "International" seems a lot more focused on the Auto-Tuned vocals, it's actually one of the weaker tracks on the album in my opinion. The lyrics are nice and gloomy. Really the whole theme of the album is gloomy and melancholy, which is something Momus can always do very well. "Cheekbone" is a livelier song, with a much punchier beat than the other songs, and more blunt and punky lyrics from Momus. The song ends quite suddenly. a lot of the songs on the album do that for some reason. By "Erostratus" you can feel the album is (unfortunately) going to come to an end soon. This song has glitchier sounding synth, and it's almost like Momus singing over a relatively repetitive and minimal glitch song, it then just goes to a humming synth in the background. The last 30 seconds take a turn for the more interesting with a bit out of place guitar playing. "Jackdaw"  is a pretty foreboding song, in both lyricism and instrumentation, it cant sound a bit cheesy again but overall it gets its job done and done well. "Shunned" is, as the name would imply, a very sad sounding song. you can hardly hear Momus' whispered vocals over the bleak instruments. The beauty in the song's despair is really great, making it one of my favorite tracks on the album, along with "Isaak," "Erase," and "Father." Finally the last track, "Isaak," comes in to close of the album. It almost sounds like it could be a track from a Prog album at the beginning, then the violin comes in and it sounds more like just a Momus song (albeit it's actually a cover of a Prefab Sprout song), this is another track where he doesn't use Auto-Tune, and it's almost reminiscent of Circus Maxmius, the violin really does add a nice touch to the album. The song isn't very long at all, very short and sweet, most of the songs on the album are like that, only about 2-3 minutes long.

While the whole sound of the album is miles away from Circus Maximus that doesn't mean it's worse, it's just a lot different. If you liked his first album there's definitely no promise that you'll like this. His lyricism remains consistently good throughout all of his releases though fortunately. The Auto-Tune probably isn't for everyone but if you're a fan of Auto-Tune as a vocal modifier rather than a corrector you'll enjoy this. I'd recommend this to anybody who enjoyed Circus Maximus a lot, because if you only though it was alright, you're likely going to love or hate the album because it's completely different. All in all this was a hidden gem from 2012 from a great artist.

It's hard to act so simply, it's easy to make noise
Posted by spillway at 3:19 AM