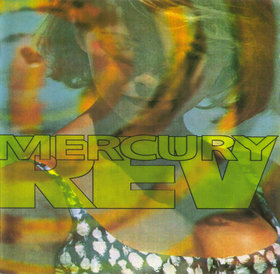 Mercury Rev, hailing from New York, USA, originally formed to soundtrack their experimental films, but at the insistence of experimental filmmaker and composer Tony Conrad (who's work with Faust will definitely see the spotlight sometime on this blog), released this, their debut album. Their follow up, "Boces" was another magnificent album, following the wild psychedelic noise rock blue print thrown down by "Yerself is Steam", but sadly for fans, after singer David Baker left the group, they became far more tame and timid, although they did receive. But "Yerself is Steam" and "Boces" still stand out amongst the teeming masses of bands that populate the Underground Rock scene of the early 90s as two albums that are so unique and sound fresh and bizarre even by todays standards.


Opener "Chasing a Bee" is a relatively tame track, and a great introduction to Mercury Rev. Baker's bizarre and abstract lyrics unfold over drugged-out guitar riffs and bizarre noodlings that underscore the track  before erupting into noisy, tempestuous bouts of psychedelia pierced with feedback and extended guitar soloing before settling back into a more low-energy groove. "Syringe Mouth" blasts off with a  crunching, powerful riff that just bleeds through your speakers, until Bakers' distorted, heavily modulate voice comes careening through, making the song even more odd by magnitudes, before the entire thing becomes swallowed up the huge array of noisy oscillations gurgling in the mix. "Coney Island Cyclone" starts off as a congenital rock jam, before being swathed in feedback. Yes, Mercury Rev love Noise, but this isn't the noise of MoHa or Prurient, the harsh grating noise. Mercury Rev's use of feedback is almost like another instrument, underscoring the tracks and then soaring through the mix, filling the track with a sun-soaked fuzzy bliss, it's amazing. This is Noise Rock done right. "Coney Island Cyclone" fades into "Blue and Black", which is a definitely a change - Baker's voice sounds so resonant and imposing, as the guitar riff reverberates and crescendos, before an uncharacteristically piano melody starts up. It's certainly out of character, but it's a nice break from the rather chaotic and noisy pace the album continued so far. "Sweet Oddysee Of A Cancer Cell T' Th' Center Of Yer Heart" steers the ship a little more on course, with absolutely amazing tribal-esque drumming that just crashes over the song like a wave doing battle with the beach.  "Frittering" starts off relatively subdued - the song is centered around a relatively simple acoustic guitar chord progression, before Baker's echoey, spacey voice comes in and the distortion kicks in and the song develops into a strung out psychedelic  jammiest that feels like falling asleep drunk out in the sun of a summer day, just this blissful warm sensation completely overwhelming you with drowsiness. Closer "Very Sleepy Rivers" is a 12 minute epic, and serves as the perfect bookend to this beautifully odd album.

Overall, while i do prefer Boces, this is an extremely unique and interesting album from America's Noise Rock scene, proving that unlike the Big Blacks or Jesus Lizards of the scene, you didn't have to be angry and spewing bile to make Noise Rock, you just need to be weird and embrace the psychedelic spirit that completely permeates Mercury Rev's work.