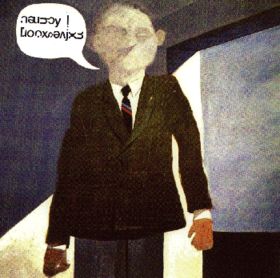 Intersystems is a Canadian experimental and musique concrete group whose music, despite being released as early as 1967, still defies specific classification. Peachy came out in late 1967, after their previous 1967 album “Number One”. The combination of Blake Parker’s dystopian narratives and John Mills-Cockell’s flittering sound collages and noise experiments create a heartless and fantastical world that is as self-aware as it is nihilistic. The album opens with the resonant dings of bells and banging of pipes, along with a low organ. The track later drops off into sounds of shuffling, which ping pong across both headphones. The next track picks up where the previous left off, featuring more of the same with the addition of the sounds of an old record being played, and some groans growls made directly into the microphone. Noisy, brutish cackles can be heard in the background emerging.
Blake Parker begins speaking on this track, but the stories do not truly start until the beginning of the fourth track, Grand Piano. The stories involve a boy and his friend finding a cave in the country full of guns, which spark the interests of the primeval villagers from their town. However, the story is told several times over, each ending and beginning in a different way. They often end abruptly, and they mostly feature the same characters. Along with the main cave story, several other short pieces are recited; dealing with everything from a boy feeling intense shame for being such a poor hunter that he is starving to death, to a description of a room that is recounted in the most eerie and unsettlingly emotionless way. At the end of each vignette, Blake claims bluntly that “The story has been told. It has ended. It is the end.”

Peachy is horrifying and unique, yet strangely accessible for its genre.  Its tales show Intersystems’s fascination with termination and brute insanity.

Sorry about the quality
Posted by SatelliteSahara at 11:12 AM