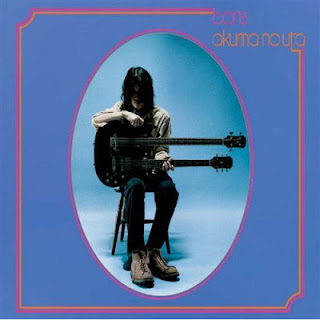 Boris has a large and varied discography, but whenever anyone asks where to start, the response is almost always the same: Akuma No Uta. This album is a monolithic achievement for the Japanese trio, crossing into so many of the styles they've dabbled in, and bringing together so many varied sounds to make an extremely cohesive and well-made album - it's a great introduction to one of the best groups in modern music

The first song, annoyingly titled "Intro" (does it peeve anyone else when they do this?) is a slow building piece. Fuzzy bass notes drone on for what seems like an eternity before screeching feedback builds, piercing the slow, sinister ambiance of the piece before the entire song is enveloped by a seething wall of distortion and white noise - it's an interesting sampler of many of Boris' distorted, sluggish drone releases like Absolutego.  The next song, "Ibitsu" couldn't be anymore different. It may start with a short burst of feedback, but the band launches into overdrive in classic Boris style - Atsuo's drumming is just manic, the guitar playing is energetic and impassioned - the entire song just sounds like a classic. Boris' music just has so much character and energy, even though they incorporate so many different styles, their music never really sound stagnant or derivative. "Ibitsu" launches into the next song, "Furi", one of my favorites on the album, underscored by Atsuo's frenzied drumming and the hypnotic, distorted repetitive guitar riff. Their music is just imbued with so much energy and seems almost completely free from restraint - it might have been said countless times about so many different bands, but to me, Boris embodies the true spirit of Rock.

The next song is easily the centerpiece of the album, and in most people's mind, is THE Boris song: The 12 minute "Naki Kyoku". It starts off with some extremely gentle and docile guitar playing, similar to the quieter, post-rock influenced moments of Amplifier Worship like "Kuruimizu". But when the fuzzed-out bass riff and searing guitar lead kicks in, this monster of a track comes alive. The rhythm section really ties this piece together, the repetitive, trance-like bass line that underscores the song reminds me a lot of Les Rallizes Denudes, while the drumming sounds powerful yet uncharacteristically restrained for Atsuo. The track oscillates from the quieter passages to the soaring, noisy guitar solo that the piece ends on really well - it always sound really organic and inspired.
The pace cools down a bit with the next track "Ano Onna No Onryou" - it might not reach the epic heights of "Naki Kyoku" but it's a driving, straight-ahead rock jam, the kind that Boris excel at. The album closes with title track "Akuma No Uta" - the slow, heavy riff builds into a chaotic loopwheeling guitar freak out that sounds straight out of a 60s Heavy Psych record, with about 10 times the intensity and the distortion. It's a great way to end the album, and a fitting representation of one of the best rock bands of the last 20.

If you're looking to get into Boris, I can't think of a better album than this. A perfect intersection between the heavy, droning style of albums like Absolutego and Amplifier Worship, and the noisy, energetic and straight up furious style of albums like Pink and Heavy Rock. A great introduction to a great band