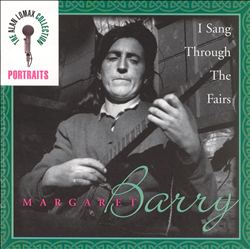 Life has been drastically changing in Ireland. Over the past two centuries, a land once stricken with famine and poverty had eventually turned into a center of technological achievement. This sort of revolution signaled the end of the traditional ways of life in rural, and as well as urban areas of Ireland. One such example is the diminishing number of a race of people in Ireland known as "tinkers", otherwise known as "gypsies" or "travelling people". These nomadic people would wander through Ireland in horse-drawn caravans, finding work by mending pots and pans, trading, various odd jobs that could help them survive get on their way. As modernization occurred  these bands of tinkers would be split up by law enforcement and/or taken in for vagrancy. Their lines of work could not compare to the new industrious world they were living in; factories took over everything they were able to do. Before the end of the 20th century, the race of the tinker had died out.


Margaret Barry: banjo player, singer, storyteller, tinker. Recorded by Alan Lomax in 1953, Barry tells the story of being a part of the travelling people and singing on the streets of Dublin to earn a living, and sings the songs that were such an important part of her life. Many of these songs made their way to recognition from artists of the traditional music revival happening in Dublin and London, namely Luke Kelly of the Dubliners. Margaret Barry is not glamorous. She is not exactly beautiful by today's standards. She is not a refined instrumentalist. Her vocals may be a little off putting to some not accustomed to the traditional folk music scene. She is one thing: real. No frills, just plain, honest, music of the people, for the people. This is not only a recording of one performer's music, but it also is a recording of a nation in transition, as well as the last testament of a dying breed.

I'll dress you in fine linen, you'll appear like a queen, With your costly fine robes and your mantle so green.

Posted by Banjoman Franklin at 2:26 AM