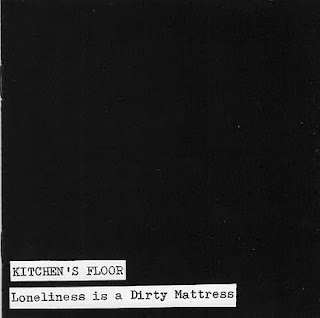 Kitchen's Floor 2009 début album "Loneliness Is a Dirty Mattress" is a statement of art as a form of fun, destruction and instantness. These Australian mini-jam masters have contributed to both the modernization and revival of lo-fi garage punk. All of the songs on this album clock under 2:30 and all of them are nods to the 80's post punk scene, 90's garage-rock scene and the 60's underground proto-punk scene. Kitchen's Floor collides these influences with some bleak irony to overhaul the charming inconsistency of their simplistic song-writing. The vocal-guitar chemistry is the essence of this album.

It petrifies the band's fluidness, though fluidness seems to want to jump off a cliff due to this album's astonishing amount of feedback, noise, carelessness when handling the electric guitar's stunning roars. Kitchen's Floor could easily be compared to Danish noise-punk band Iceage in that aspect.
The lazy vocal chants on "Downed It", the wordless vocals of "Sparkles" and the angsty dissonances of "Failure" make this album a bitter-sweet ironic collection of anger and pleasure.

Kitchen's Floor has effortlessly managed to recreate a session of lively garage-rock songs that will gladly pat the back of any lover of garage-rock and lo-fi, an intriguing evolution of punk may be witnessed.