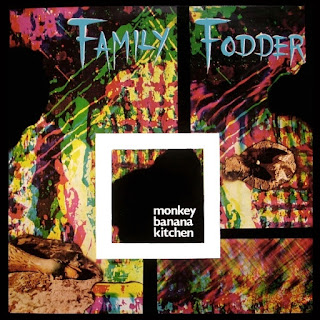 Family Fodder was a band formed in the 70's whose sound could most easily be described as Post-Punk. Being an earlier band of Post-Punk usually equates to being relatively experimental and unlike most post-punk today, this is definitely true for Family Fodder. One thing interesting about this band is that they were led neither by a guitarist nor a vocalist, but by an accordionist Alig Fodder (whose real name is John Pearce) who still leads the band to this day. From 1979 to 1983 the band released 14 pieces of music, of which only 3 were full length albums. Since the group's reformation in 1999 they have released an additional 2 album, Water Shed, and Classical Music.

Monkey Banana Kitchen starts off with a strange, hypnotic A Capella song called "Darling." Certainly an interesting way to start the album off. The next track, "Symbols," is much more in the vein of Post-Punk, a great punchy beat and the noticeable but not unpleasant repetition.  "Savoir Faire" is a staple Post-Punk song, Dominique Levillain's voice is great, and the song is almost reminiscent of a Post-Punk influenced Stereolab. The bright and sunny instruments in the background make the song even better. The guitar is lively and fast over the same couple notes, the Synth is just hitting these few juicy notes and it's just such a happy song. Up next is "Cold Wars" which offers some really clever and cheerful lyricism.

The whole album actually is really cheerful, especially when compared to their gloomy, and even sometimes overly angsty contemporaries. (coughjoydivisioncoughcough) While there isn't nearly the same level of experimentation as a band like This Heat they certainly pull off a fascinating sound. But keep in mind they are certainly not akin to early Post-Punk bands such as This Heat, so if you had come to see some dissonant, exploratory Post-Punk you will be pretty disappointed. All that being said the album is still very excellent.

"Monkey" offers a much more playful tune, while also being very trippy and experimental, with the reptetive tune and the strange lyrics with strange layering. About halfway through the song it gets even stranger, cutting to silence only to seem to restart all over again. "Wrong" almost seems like a parody Punk music itself, while also sounding a bit like Frank Zappa, as far as vocals go. For the last 20 seconds though the feedback on the guitars go way up and it becomes very frantic and noisy, strange but very cool. "Der Leiermann," which translates to the gruesome sounding title of "The Organ Grinder" is, obviously enough, in German, meaning so far the album has used three different languages, French in Savoir Faire, German in this song, and of course, English. I really wish I could translate the lyrics of this song so I could find out what they're saying. I'm curios what the lyrics to a song called "The Organ Grinder" are. The last minute of the song is, admittedly a bit of wankery and can feel a bit tedious. "Love Song" fits perfectly in with the rest of the album, upbeat, a bit repetitive but not to a degree where it's a negative attribute. The transition of male and female vocals can seem pretty cheesy at first and not everyone may be a big fan of it, but I'd have to say it does grow on you.. This song kind of abruptly fades out for some strange reason. The song "Bass Adds Bass," as the name may imply, is a bit influenced by Dub or Reggae music, which may seem strange to couple up with Post-Punk, but the three are more related than you'd think, and this band manages to blend them pretty well anyway. It's actually probably one of my favorite tracks from the album, along with "Savoir Faire" and "Cold Wars." The next song, titled "Philosophy," is more in the vein of the song from earlier on, "Wrong." Pretty strange vocal delivery, it's definitely something you're either going to love or hate. Another thing to add is that the beat on a lot of these songs is very memorizing and you might be tempted to stomp or tap along with it. "Wrong" just ends suddenly to go to "Cerf Volant" which sounds like it's in French, and it's really amazing how well the singer transition from French to English, it's very smooth and clean, almost feels like it happened mid-stanza. This one is another sond that feels Stereolab combined with someone like This Heat, which is a really great combo, I'd like to add. "Banana" is another song that's almost exactly like Monkey, the exact same setup, and they're even chanting the same phrase, albeit this time adding "with a banan-a" to the end. If you weren't a massive fan of "Monkey" the first time by the time you get to this song you'll probably begin to like it more.

All in all the album is pretty enthralling and captivating. If you'd like to get into Post-Punk and would like to start out with an early classic example of the genre you, well, probably should check Joy Division or Talking Heads or something. But if you're actually familiar with the genre and would like something really good, check this out, it's definitely an overlooked classic. Not quite the best entry point to the genre, but definitely one of the best, and unfortunately most slept on, albums of it.