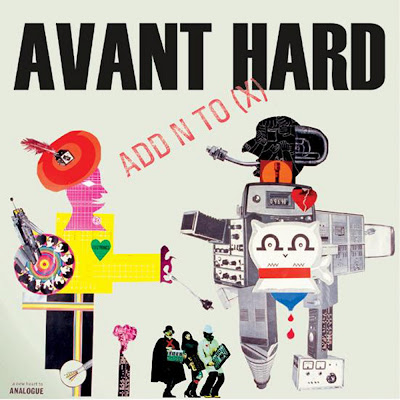 Avant Hard is the third album released by the British electronic music trio Add N to (X). It's an album of many words to say the least, its essence can only be truly captured by experiencing it after repeated listens and reflections. It's a necessary compilation of claustrophobic and vintage-sounding electronics that are violently and chaotically arranged for pure fun and style. The cluster of electronic anarchies on this album is very foggy and even unclear at times (not that this is necessarily bad), it seems like Add N to (X) has invented a new style of composition, a controlled mess of lawlessness and revolutionary orgies. The track titles are terribly ironic yet fitting regarding the album's music, they range from silly phrases like "Steve's Going to Teach Himself Who's Boss" to post-future sentences like "Machine Is Bored With Love" as if a realization of destruction and playfulness were applied through the trajectory of this album. Fun and abolition are the key words to this album.

Avant Hard's tracks are very varied indeed, "Barry 7's Contraption" (the most accessible track on the whole album in my opinion) is a machine's anthem of happiness, while "Fyuz" seems to be an ode to the post-punk/No-wave duo Suicide that marries noisy murders and random babbles. "Metal Fingers In My Body" is ecstasy and trance packed in a 5 minute quasi-rock jam.
The last three tracks on this album closes it in a very reflective way. "Ann's Everyday Equestrian" starts out as a ghostly melody that tries to break out of it's one cocoon with constant undertones of small horse-demons trying to scream themselves out of it. The ending of this track puts us right in the mood for what's to come. "Oh Yeah, Oh no" is a heartfelt canticle which is easily the album's softest spot, maybe even it's core, a kind of resignation so contrary to the dirtiness and hilarity of the previous tracks. It's only by the last 2 minutes of this 7 minute track that some drum samples intrude, the track ends in an ambivalent drone.
"Machine Is Bored With Love" doesn't sound like the Add N to (X) that we have known so far, that's easy to explain because the organ samples are from the progressive rock band Egg's "Fugue In D Minor" from their self-titled 1970 debut. Not to say though that Add N to (X) makes this sample their own and what seems to be a lovely organ line soon turns to a cacophonous sound-scape.
Avant Hard is exactly what the title implies. It is an avant-garde statement in the sense that it takes electronic music and takes it to a whole new level of irony and computerized chaos.


Avant Hard On
Posted by Coopigat at 7:17 PM