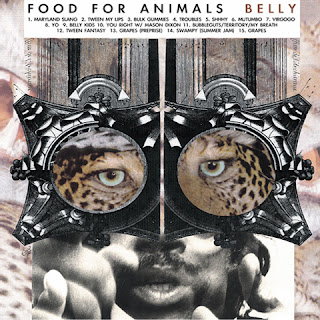 One thing I love to see in Hip Hop is an incorporation of Noise or Industrial music to the production, unfortunately acts like those seem so few and far between. Groups like dälek will be remembered for their brave and caustic production, and there are more newcomers like clipping who are trying to forge a name for themselves with frantic Harsh Noise being incorporated into his music. Food For Animals is another one of those rare bands. They are a Noise-Hop trio from D.C. who released their first, and as of now only, full length album in 2008.  Their tendency to incorporate Glitch and Harsh Noise into their Hip Hop creates a really stunning sound.


The album kicks off with "Maryland Slangs" which starts the album off nice glitchy and noisy beats to shortly turn into a wall of beats and some sampling which stutters in to the next track "Tween My Lips" which starts off on a calmer note to just shortly erupt back into some nice glitchy beats. We can already tell from the start of this album that all the beats are going to be crafted with such a great attention to detail. The second track also just fades into the next one, "Bulk Gummies." The lyrics are great and arrogant yet very clever, to say the least, they definitely give off a powerful sound as their two MCs just belt out their verses with a nice flow. Then at the end of that we're greeted by, strangely enough, a skit. Not really much to say about the skits, they're funny but relatively out of place. The next track, "Shhhy" is a bit more abrasive with some nice juicy beats and even more engaged and caustic rapping. The MC's flow in this one just feels like a constant stream and it feels like he never goes to take a breath. The ending for this is a bit strange and leads into the much much much noisier song "Mutumbo" which is even harder than the previous tracks, bordering Noise almost, and the rapping at the beginning goes at subsanic speeds, they do end up slowing down a bit toward the end but the instrumentals stay hectic. It almost sounds reminiscent of Breakcore. The next song "Virgogo" is a different note on the album, with some really crazed sampling, a bit repetitive but it's still really well made, like I said there's a nice attention to detail on this album, they really brought everything to the table. Then we're greeted by a short 18 skit, it's just a short glitchy beat on repeat, kinda strange.

Already over half way through the album we find "Belly Kids," which starts out with a bit more glammier and flashier sounding production, only to switch to the normal tireless cacophony of noise and beats. The song calms down for a little bit, but like always it picks back up as always and ends on a sort of an a capella from the MC as he spits out some great lyrics as always. Then we're onto track 10, "You Right," it's a bit calmer of a song allowing the MC to slowly and deliberately lay out his lyrics, interchanging from a relatively standard rapping to what feels like the use of a vocoder and layered vocals, a bit hard of a sound to describe but its one I've always been quite fond of. Now we're onto "Bubbleguts/Territory/My Breath" which has an intro that more Glitch influenced than anything else. A nice acidic sound to it, the whole album just has that acidic feel to it, it's great. It kinda fades into the next parts of the song, Territory and My Breath, the ending of the song gets a tad bit repetitive with him repeated the chorus over and over again but I really don't mind, it's a really nice chorus. "Tween Fantasy" is really strange relative to everything else. It starts our with some recycled lyrics and then we go on to some strange sounding strings that sound out of place, but not unwelcome. Then we reach the final stretch of the album, "Grapes (Reprise)," is another instrumental track focusing more on the great glitchy production. A bit repetitive, but it all has an almost serene feel to it. Then we're onto the second to last track, "Swampy (Summer Jam)," which is relatively standard in comparison to the rest of the album: great glitch hop, the only thing off with this track is the odd choice in sampling, that is I'm assuming it's sampling of some, honestly, cheesy sounding synths. It ends and "Grapes" immediately picks off with a bit of a droney sound, then the MC comes in with some grade-A rapping. This song isn't anything extraordinary, relative to everything else. That's one point of criticism for this album, a lot of the tracks are pretty similar, not bad, not at all, just not that diverse. But I digress, the album comes to an end on a bit chilling, glitchy note.

In the end Food For Animals is a great Hip Hop group and Belly is a great Hip Hop album, and albums like this are, in my opinion, way to few. If you're a fan of Death Grips or dälek, or you want something different in Hip Hop, I would definitely tell you to check these out.