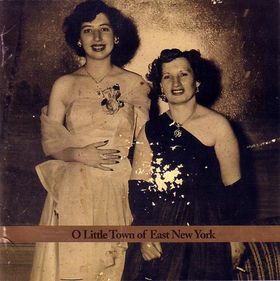 Shelley Hirsch is an American performer from New York. She's been involved in various areas of the arts - from theatre, to film, and, most importantly, music. She first began working in an experimental theatre troupe, but went on to study some more experimental and extended vocal techniques.  A lot of those ideas are explored on this extremely bizarre, interesting and unique album.


Much like Hubert Selby Junior's "Last Exit to Brooklyn", "O Little Town Of East New York" provides a really character-driven look into a side of New York that many might not see. But unlike Selby's dark, obscene magnum opus, "O Little Town Of East New York" is a beautiful, albeit odd description of a Jewish Neighborhood, and the many characters that inhabit it. What I really love about this album is how three-dimensional the characters are - Hirsch creates characters that seem so real and detailed, you can't help but imagine them fleshed out, strolling the streets of New York, or sitting inside, reading Dostoevsky -the whole album so lovely and picturesque. Now, this album is part of Tzadik's Radical Jewish Culture, and yes, Hirsch's proud sense of Jewish identity shines through on this - Skinheads might be disappointed, but to everyone else, it's a great addition to Tzadik's roster - the range of Jewish characters she conjures up are anything but stereotypical, and really add to the the three-dimensionality of the characters and the overall narrative of Hirsch's album.

And while I would classify this as Spoken Word, Hirsch's voice is not just flat, monotonous monologues - Hirsh's voice soars and bellows, going from playful sing-song to crazed yelling, and occasionally, beautiful singing. It's a very varied album in terms of vocal delivery, and Hirsch's experimentation only makes me love this absolutely bizarre album even more. On another not, the instrumentation on this album is extremely varied and bizarre as well, and I love it. It goes from odd and off-kilter bleeps and bloops to screeching violins, to plaintive piano ditties - it's absolutely lovely, and it perfectly complements the music.

Overall, this album is a lovely addition to Tzadik's Radical Jewish Culture - the characters seem so real and fleshed-out, Hirsch's unorthodox and oft-changing vocal delivery, coupled with the idiosyncratic and strange instrumentation makes this an extremely unique album that will completely captivate you.

this is a blog for posting whatever our moods dictates. always looking for new contributors who are eager to share great music.
feel free to contact me via soulseek (sibylline)

sorry about the numerous dead links, i'm lazy. most of the releases posted by me (spillway), and many more, are available via my soulseek (sibylline)