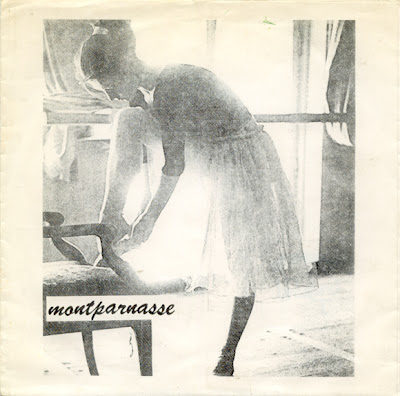 Yōran's 1981 EP "Montparnasse" is a depressing release, not only because of its mood but because it is so unfortunately short and obscure that one is only left to wonder about it without ever really knowing anything about it. The album begins with "Concert Maillol", which starts out as a bitter-sweet ballet-esque piano piece which later degenerates itself into a weary collage of what seems to be a weak synthesizer or a guitar with some of the most  haunting and magnificent field recordings of people talking I've ever heard. Then the track transforms into "Je Derve Avec Láir", starting out with the same notes as the piano piece in the beginning of the last track, only that this time the field recordings feel even more desperate and outrageous. Laughs, whispers, and what seems to be an angry imperative sentence haunt this delicate piano piece, crumbling it into a poem of retreat and pain. One cannot stop thinking that this release has some sort of story at this point of the EP. The next track is "Montparnasse" this time the piano-piece sounds heroic  and even fearless, like it's trying to liberate itself from the shiver-worthy words of whoever is speaking over it. Steps, a howling wolf , delicate screams of pain, and joyless whispers bitterly attack this piano-ballad once again, by the end of this track we feel defeat, as if the music has crucified and tortured itself for the good-being of something else.  "La Bou....." is a toy-box melody accompanied by words that seem to announce a epilogue, an epilogue of sweet death. "Montparnasse" is a self-destructive EP that seems to try to get rid of itself, one can only pretend to understand such a dusted gem. One can only invent its story, maybe it's a haunted ballet studio, a piano-ballet that brought a man to its demise, or maybe just a statement of depression and curiosity in its purest form.