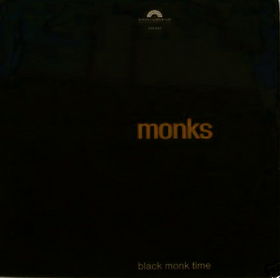 One of the most unique and ahead of their time bands ever. From the introduction of Monk Time, the authoritative call of Burger rings out over the driving, noisy and hypnotic instrumentation, and as the Monks launch into their first song, you know you're in for something special.

A lot of people are calling the Monks "proto-punk", but this album, a gem of experimental rock,  has far more going for it than being the inspiration for banal, three chord rock. Firstly, the instrumentation of this outfit definitely helped them stand out from whatever contemporaries they had. The hypnotic, repetitive percussion, the driving, pounding fuzzed-out bass, the haunting, demonic organ on songs like "I Hate You", and most bizarrely, the electric banjo. The bizarre, off-kilter instrumentation helps the Monks establish one of the freshest and most unique sounds of the 60s - and helped set the perfect background for the absolutely outlandish vocals - from the military call-and-response of "Drunken Maria" (they were American GIs stationed in German after all) to Burger's bizarre sing-shouting on tracks like "That's My Girl".

And you have to admire the Monks - even they don't sound like themselves from one track to the next. They'll go from seething walls of feedback and driving fuzzed-out bass to far more subdued, almost poppy tracks, to militaristic marches. I'm sure if they had of achieved more fame, they would have been picked up by a major record label at the time, and homogenized into another pop group to compete with the Beatles. But the Monks were beyond that - they were true trailblazers, making music that, at the time, was truly ahead of their contemporaries, and still to this day, nobody has been able to make something like it, despite the various imitations. The Monks are bizarre, zany, abrasive, and frankly, a musical experience that's unique and almost beyond compare. This is essential listening.