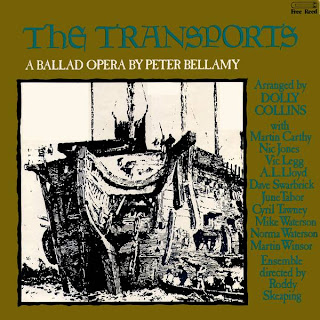 Peter Bellamy was a prominent figure during the English traditional music revival of the 1960s and 1970s. He dropped out of college in 1965, at the suggestion of friend and fellow traditional musician Anne Briggs, to pursue a career in music. He formed The Young Tradition, an a capella traditional English singing trio, with members Royston Wood and Heather Wood. This group took influence from family singing groups the Watersons and the Copper Family, as well as traditional singer Ewan MacColl. The group disbanded in the early 1970s and Bellamy took on a solo career, performing traditional English songs a capella or with his Anglo concertina. Sadly, his life took a tragic end after he committed suicide in 1991. The Transports is Peter Bellamy's masterwork, a folk opera consisting of traditional songs re-worded by Bellamy that tell the true story of Henry Cabell and Susannah Holmes, two convicts that fall in love, have a child and are both separated after being transported to prison colonies in Australia. Several other prominent English folk revival figures join Bellamy, each playing a specific character in the story line. Collaborators include: Nic Jones, A.L. Lloyd, Martin Carthy, Dave Swarbrick, June Tabor, Mike & Norma Waterson, Cyril Tawney and more. Arrangements are by Dolly Collins, sister of traditional musician Shirley Collins. Complete with period instrumentation, this album is a striking and powerful blend of English traditional music and history. Hopefully this album will leave you feeling a bit different.

The Transports
Posted by Banjoman Franklin at 9:38 PM