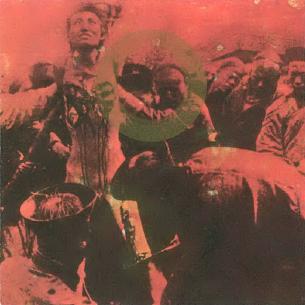 Leng Tch'e is a ridiculously overlooked album from John Zorn's Jazzcore outfit Naked City. The album was released in 1992, the same year that Naked City's much more popular Grand Guignol was released, in my opinion Grand Guignol pales in comparison to this masterpiece. This album was also one of the first albums that could be classified as Drone Doom, predating Earth 2 by a year. For those of you who don't know what Naked City are: They are a band founded in 1988 by the insanely prolific artist John Zorn, their sound can best be described as Jazzcore, a mix of Jazz music and Grindcore which, surprisingly, works. Another thing to know is that "Leng Tch'e" is Chinese for "1,000 Cuts." It was an execution technique used in China where they cut off portions of the condemned's skin but kept him or her alive, the album cover actually depicts a real life occurrence of this gruesome act.

But I digress, anyway what makes this album so much different and so special compared to the rest of the band's work is that most of their songs from all of their other albums are about 1-3 minutes in length, consisting of Grindcore-esque vocals with some Jazz aspects throw in, to be frank, while relatively good, a lot of it is quite silly. This album, on the other hand, is much more serious and consists only of one very long song and starts off with loud, droning guitars with some really hard percussion in the background. In the beginning the guitars on the album oft cut to silence allowing for short drum solos, only for the droning guitar to eventually pulsate back as hard as ever. It really sounds like he's beating the hell out of the drums and I love it. The glorious droning guitars and the furious drumming go on like that for about 16 minutes, and then the wonderful, amazing, manic screaming starts. The singer, who I believe is Yamantaka Eye, a member of Boredoms, is really screaming his guts off in a great way. He just screams his lungs out over and over, all over these brutal drum playing and this powerful moaning guitar, and then John Zorn comes in and begins ruthlessly playing his sax, making the album whole. The last three minutes of the album are absolutely insane, in fact the entire album is absolutely insane. For those who don't really like Grindcore or Jazzcore, but would like to get into it, this album is a good place to start, then I recommend moving on to Painkiller, another Jazzcore band founded by John Zorn, this one though has more of a Jazz influence than a Grindcore one. All in all, from Zorn's squealing sax to Yamantaka's bloodcurdling screams this albums is a complete stunner. It's not for everyone though. If you aren't really a fan of harsher music or Drone I wouldn't say it's essential, but if you're willing to open up and try out new kinds of music, you should definitely check this album out.