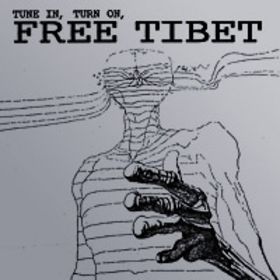 Ghost is an interesting band, and one I'm surprised that more people don't know about it - guitarist Michio Kurihara has even worked extensively with fellow Japanese rockers Boris, yet the band still remains relatively obscure. They broke up shortly after the release of at the end of the 20th century, only to reform later and release another album in 2004. Still, Tune In, Turn On, Free Tibet remains a testament to this interesting and unconventional group The first part of the album stays in relatively traditional Psych Folk territory - normal for Ghost at least - although the idea of Tibet and Buddhism flows throughout - for the first 30 or so minutes, this is a very serene album. Opener "We Insist" obviously pays homage to the central theme of the album by incorporating certain Tibetan instruments, and in fact, the first part of the album features Masaki Batoh's very hushed vocals over tenderly played acoustic guitars - at times, Batoh's singing is almost whisper quiet, and at other points, it sounds more like he's speaking than singing - it's beautifully tranquil, almost quiescent at times. Sometimes the pace and the intensity quickens - The vocal harmonies on "Comin' Home" for example - but for the most part, the first part of the album is tranquil and serene psych folk made up of a few easily digestible songs. The relatively noisier and more psychedelic "Change the World" gives a glimpse of what's to coming, building into a psychedelic guitar freak-out before fading back into mellow, guitar-centric psych folk before lapsing back into noisy, loopwheeling psych rock
The second part is a completely different monster - the 30 minute title track "Tune In, Turn On, Free Tibet " is the real centerpiece of the album - the song starts off as extremely spacey and serene - it retains the poignant beauty of the rest of the album - but it's a shifting, snaking song - it shifts from thunderous tribal-esque percussion to oscillating bleeps and bloops, to crazy psychedelic guitar freak-outs. It's an immense piece, and while I prefer the soothing, mellow folk-oriented first part of the album, it's the second half that really makes it a unique record and shows off the prowess of Ghost as a band, cementing them as powerhouses within Japan's modern Psych scene.