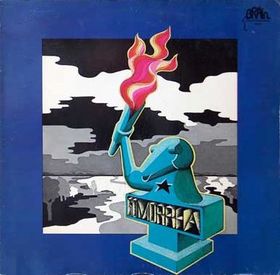 Gomorrha were a relatively short-lived German band associated with the Krautrock movement operative in the early 1970s. In 1972, they released their swan song "I Turned to See Whose Voice It Was", considered by many to be their finest album. This album is a masterful blend of more blues-based psychedelic rock and progressive rock to create an extremely lively sounding brand of Krautrock dubbed "Hard Krautrock" by many germanophiles. Personally, this is one of the overlooked gems of the Krautrock movement, and one that definitely earns it's place on this blog

The first song launches into some psychedelic guitar noodling that seems to envelop the listener - courtesy of Brain Record's legendary Conny Plank (who's studio touch is all over this album.) The song settles down relatively as the singer launches into the first verse, but the psychedelic fuzzed-out guitar line comes back in with full force, echoing back and forth, and creating an almost disorienting psychedelic sound - when suddenly the song launches into a quiet acoustic passage most abruptly - it's an odd change, and it kind of sets back the momentum of the song, but not for long, as an ethereal organ comes creeping through the mix like a ghost emerging from a fog and the band slowly launches back into the singer's next verse before breaking down into a toe-tapping extended jam that carries off until the next song. Just to interject slightly - Normally, Progressive Rock with organ is something I absolutely abhor, but on this album, especially "Dead Life", it's integrated really organically, I think it really complements the fiery guitar leads and extremely funky bass lines. As "Dead Life" ends, in comes the groovy, funky, Can-esque drumming on the title track "I Turned To See Whose Voice It Was", which reminds me a lot of similar Krautrock acts like Ibliss and Niagara - it's a real testament to how fluid Gommorha's music is that it is able to incorporate so many different sounds and yet sound so cohesive and fleshed out, it's not like they jus threw in an organ to sound like Van Der Graaf Generator, or tried to use as many studio effects for the sake of it - their music sounds incredibly organic, I can't help but once again compare them to the venerable Can.

To me, Gomorrha is far more memorable than many of the other "hard Krautrock" bands of the era who's Psych-tinged Prog has been all but forgotten in the annals of time (Silberbart's "4 Times Sound Razing" comes to mind)  it blends progressive song structure, a group of very talented musicians in order to inject a healthy dose of 60s rock back into the at-times overly esoteric and academic sounds of some Krautrock bands, to produce a really organic sounding and psychedelic progressive rock album