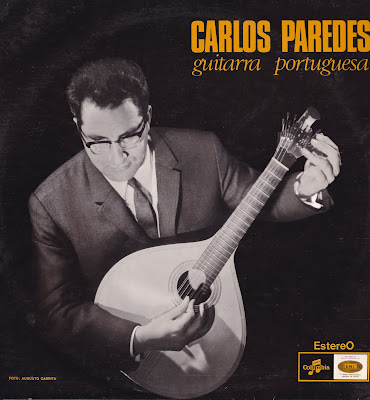 The first time I listened to Carlos Paredes' music was on my local cultural radio. Before the music started playing the radio announcer started talking about Carlos Paredes' family and how his father introduced him to the Portuguese guitar and was his mentor. Which made me think about how powerful and transcendent music can be, just to think that an instrument and its very particular music is being passed down generation to generation made me feel very pleased and even moved, what's even more enchanting about this is that it's rare to talk about Carlos Paredes without mentioning his father. He even said :
"When I die, my guitar also dies.
My father used to say that, when he died, he would like that his guitar would be broken and buried with him.
I would like to do the same. If I have to die.”

This even furthers the importance of music and tradition in this family. Just think about how indispensable this small Portuguese guitar (which is barely half the size of a guitar) must be to them. These sentiments of love and passion for the instrument are deeply impregnated in "Guitarra Portuguesa".
The album starts with "Variações em Ré Menor" and right off the bat we get Carlos Paredes playing at an incredible speed with barely any impulses, we experience these warm and elegant melodies that are very Baroque and folk influenced. Carlos Paredes uses speed in a humble way, it's no doubt that this exhilarating playing is a product of the Paredes' passion for the Portuguese guitar. Of course that I would be dismissing half of this album's beauty if I were just to mention Paredes' speed, he also has a very distinct and articulate sense of melody as can be seen on tracks like "Melodia No.2" and "Dança" where important points are highlighted by strong string plucking and dramatic tensions. Carlos then plays a depressing and heroic Waltz on the track "Valsa". After "Valsa" comes what in my opinion is the most cinematic and imaginative track on the whole album; "Divertimiento" (fun in portuguese), it starts out with some glad chords that will later be elaborated as the main rythm, these chords are followed by a very clumsy melody that tumbles back and forth only to be dismantled bravely at the one minute mark. Carlos Paredes proceeds back to the first clumsy melody and concludes it with the chords from the beginning accompanied by some very speedy, articulate and maniacal playing. The next two tracks ("Romance No.1" and "Romance No.2") are easily the most sentimental tracks from the album, lush and beauteous streams of melodies that caress each other in fatal parsimony are constantly present in these tracks. The album concludes with "Melodia No.1" which is a particularly interesting track because Carlos Paredes is playing slower than ever, the melody is very bouncy and reflective, and little to no rhythm is accentuated in this track.
"Guitarra Portuguesa" is an impressive marriage between virtue and passion that never grows weary or stale. This is without a doubt a landmark to guitar music in general. A must-listen for any lover of international music, guitar music, and/or fado.