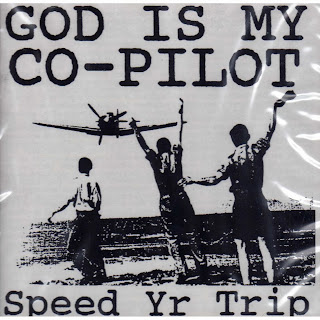 So apparently Queercore is a genre of music. It's actually pretty good too. Well it was more of a scene and a movement, occurring it a lot of mediums, journalism, art, music, etc. but this is just a music blog so let's talk about it like it's just a genre. God Is My Co-Pilot was a great little gem from the music side of it. Best described as noisy, unorthodox, anarcho-punk. They were spastic and all over the place in the best way possible. This album is full of short, blunt DIY punk songs. It's such an in-your-face kind of album, like a big musical revolt against mistreatment of the LBGT community. It's a splendid politically-fueled album that's definitely worth a listen.

Anywhere but here
With anyone but you
Posted by spillway at 12:22 PM