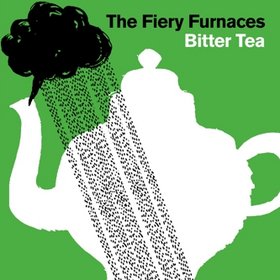 Opener "In My Little Thatched Hut" lurches into a wonky, bizarre sounding synthesizer lead as backmasked sounds fly by as Eleanor's crisp, articulate singing spreads itself over the winding, squelching synth riff before breaking into a cute little guitar melody which itself fades into another bombastic, energetic synth melody - the song changes pace so often, returning to fragments of sound and twisting into new sounds before disintegrating into a chaotic mess of backmasked vocals before eventually reverting back to the original, squelching synthesizer melody. It's an odd, varied journey, and as a track, almost perfectly encapsulates the experience of this album - it changes pace and tone so often, but despite the stark contrast, the change from one section to another always feels so masterfully organic, the changes never feel overly forced or out of place.

As I mentioned, backmasking does play a significant role in this album - in fact, Matthew seems significantly influenced by Musique concrete, with sounds, especially his and Eleanor's singing being sped up, slowed down and played backwards numerous times throughout the album. Sometimes it can feel very disorientating, which I find interesting: it really makes the album an engaging and active listening experience, rather than some banal album you might put on in the background while focusing your attention on something else. It's quite ambitious for a pop album, but while other albums may try and fail, coming off as overly forceful, Matt and Eleanor have created something that is intriguing and beautiful as it is bizarre. Another thing I really enjoy about this album is how organically the acoustic and electronic instrumentation intertwine, jaunty piano melodies giving way to distorted, gurgling synthesizer melodies without a misstep. Matthew also seems far more willing to experiment with breathtaking, soaring soundscapes and lengthy instrumental interludes. They're impressively good, and provide a good amount of breathing space between Eleanor's verses at times. But for me, these centerpiece of the album is the lyricism and Eleanor's singing - the bizarre, unorthodox adventures all over the globe take the Freidberger siblings all over the world, encountering a huge stable of eccentric and devilish characters along the way. It's a fantastic fun, and Eleanor's delivery, staying pleasantly within her natural vocal range for the most part, suits the music to a T. It's a lovely album.

So, while 2005's "Rehearsing My Choir" may have seemed like a misstep to many of the group's fans and critics, "Bitter Tea" proves that they could re-conciliate their ambitious and challenging experimental ideas with a charming pop sensibility that make them one of the most interesting pop groups in modern times, creating an album that is simply an amazing experience, and comes highly recommended.