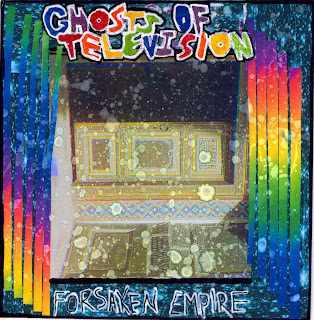 
The album itself is pretty unique, Ghosts of Television offer us a mishmash of Post-Punk and Post-Hardcore with a bit of a Psych-ey Garage Rock kind of feeling. The whole album is under a hazy, dark, feeling, with pretty subdued vocals throughout, occasionally shifting to more frantic screaming. The album achieves a really heavy and dark atmosphere that will really pull you in. By "Arthritis" the album his a quicker, more upbeat note that feels just arid and hypnotic, its quite hard to describe. One of my favorite moments from the album hands down is the completely mesmerizing second half of "Topsoil" which just sucks you into to its Venus-like atmosphere. The climax of the album is undoubtedly "Forsaken Empire" with its quick shifts from calm melodies into chaotic, hectic and violent screaming and thrashing. And "New Flesh" end the album on the perfect, somber note. While definitely not an album for everyone, I'd recommend this album to a big fan of Post-Punk who perhaps wants something radically different and much harsher than what they're used to.