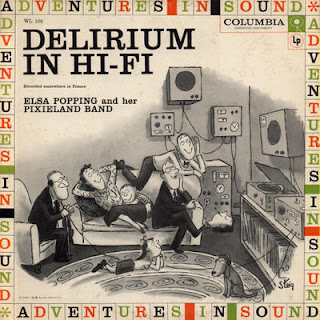 There are two types of avant-garde music, segregated not by a link to any one tradition but by why they are classified as avant-garde works. One group pushes the boundary of what we consider enjoyable art music - for example, Arnold Schoeneberg, Faust, or John Coltrane's free jazz era. The other group pushes not sonic boundaries but maintains innovation by presenting familiar sounds and melodies with a twist - for example, Charles Ives, or The Books. While this group is less immediately recognizable as avant-garde, it is no less enjoyable. Andre Popp's excellent 1957 space age pop album, Delirium in Hi-Fi, falls squarely into the latter group.


So what makes Delirium in Hi-Fi avant-garde? At first listen, it may sound like merely some of the best-composed incidental music ever (and that's not solely due to Andre Popp's brilliance - many of the tracks here are covers of other pop songs of the time). Tracks like "Beer Barrel Polka" would not be out of place in the background of a Mickey Mouse cartoon, with its massive array of instruments all playing similarly upbeat melodies at different times. It even ends with a slide-whistle. However, upon further review, these sounds have been warped, and thus have a timbre unique to this album. Tape manipulation is also found all over the album, with horns, woodwinds, and voices all having been slowed-down/sped-up for great comic and dramatic effects. For example, in "Java du diable," a double-time piano floats over a sinister woodwind section, and in the outstanding "La polka du roi," the singer actually sings the song backwards, which Popp then flips, so the words are comprehensible but it still sounds backmasked in the same way that the ending to the Beatles' "Rain" does (and feel free to point that fact out to anyone who thinks that the Beatles' sonic effects, in 1965, were 'innovative' in pop music).

It's all excellently composed, extremely funny to the point of being demented (and absolutely not in the way Zappa's "humor" is), and a really interesting listen from a historical perspective - Popp's tape manipulation laid the groundwork for, oh, let's say Can and William Basinski. And while Delirium in Hi-Fi is closer to polka-infused big band than groovy, funky Kraut or ambient, you can at times catch traces of similar tape effects used by the artists. Anyway, while you might not enjoy this album, you also might think it's brilliant, and anyone interested in tape effects at all would probably enjoy the hell out of this thing.