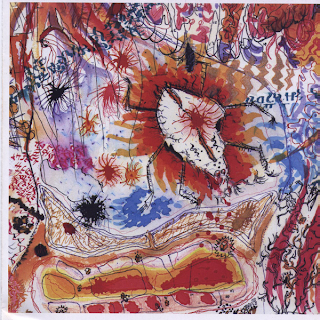 Wooden Wand is the moniker of James Toth, a free folk artist from New York. He's remained quite under the radar, creating quite a few hidden freak folk gems since the dawn of the New Weird America movement of the early 2000's.
He has released a few amazingly hypnotic albums, my favorite of which is either The Flood or Gipsy Freedom, which were both in collaboration with The Vanishing Voice, another freak-folk group that Toth has produced several albums with. This particular album starts out on a great note, with beautiful female vocals which reign in perfectly among the organized chaos of the first track, Snake Earl, though this track does seem to be more drawn out than the rest, it's still very good. The second track, The Flood, has the female vocals this time joined by another male's voice, the singing on the track is haunting and gorgeous at the same time, sounding like an eerie, apocalyptic chant over equally foreboding instrumentals that subtly descends into madness as it goes on. It's a track that I can't really do justice to with just words, it's something that needs to be heard to be understood. And it is also something that sounds new and fresh no matter how much you listen to it, you'll always find yourself noticing new textures and sounds and quirks with every consecutive listen, the song is just very lush and layered. It's really quite brilliant. The next track is titled (I Wanna Live On) Sunbeam Creek. It's much shorter than the previous two tracks, and it's also much more of a traditional sounding folk track, which Wooden Wand can also do amazingly. It's simple, short, and just a very very pretty sounding song. The next two tracks, Dogpaddlin' Home In Line With My Lord and Lifetime Of The Season (Interlude), also follow that route. Unlike some free-folk band, Wooden Wand has the ability to create more accessible, but nonetheless great, folk tracks and still manage to make them fit in seamlessly with the more drawn out and chaotic tracks on the same album. The album ends with Satyn Sai Sweetback Plays Oxblood Boots, which goes back to the more experimental sound of the first two tracks and starts off with a raw tribal-sounding beat, which eventually descends into and is lost in sweet, hypnotic, madness. It's somewhat difficult to put this song into words, and as it ends the album masterfully, and really has the power to leave the listener begging for more. The Flood is definitely one of the best free folk albums that I've listened to as of late. Full of flavor and substance, unlike some other bands which I feel succumb to pointless wankery at times. I'd recommend this album to any fan of the genre, especially those who like Spire that in the Sunset Rise, as they definitely share similarities with Wooden Wand. This album also, in my opinion, serves as a good starting point into the genre, not too out-there, more accessible, and a masterpiece regardless.