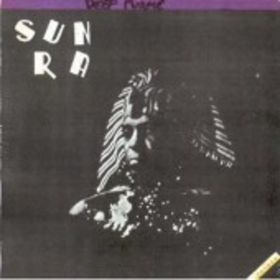 Wait, this is Sun Ra? I'd scarcely believe it if having heard. No big band freak-outs, no cosmic prayer, no electric keyboard madness: this is, for the most part, a dark and smoky vocal jazz album consisting mostly of covers, with the Arkestra supposedly providing the backing. Hatty Randolph's singing sounds alluring and sensual yet all the while sounding slightly disinterested, and the rather low fidelity producting shrouds both her and the Arkestra in a cloud of dense smoke. For those wondering where the weirdness listeners had come to associate with Sun Ra thus far,"The World of the Invisible" is one of the more conventional Ra tracks on here, with some furious skronk laid down by his brass section and some more powerful and jaunty electric keyboard melodies courtesy of the man himself while the band plays away in the background, though it never really reaches the chaotic heights of some of Ra's other albums. Closer "Land of the Day Star" picks things up with a heavy, sawing string melody lurking in the background while halfway through the song a soulful saxophone solo swings through Ra's domineering keyboard and the crashing drumming to take centre-stage before the song simply fades out, ending the album. This is certainly something different from Ra, and the A-side is easily one of the more conventional pieces Sun Ra has ever done, making this bona-fide standards record an excellent starting place for Ra's latter day works.

Deep Purple
Posted by Hani at 7:42 AM