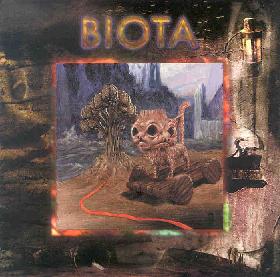 From what I’ve gathered listening to an infinitely small sampling of all the music out there, all genres have their highs and lows.  Whether it’s a specific moment or scene, or just a handful of artists and albums, every category (save for an anomaly or two) offers both great and horrible music.    However, for me personally, the range of quality is never as extreme as with progressive rock.  At its best prog is both complex and evocative, offering varied and intricate instrumentation that can still stir up abstract yet potent emotions.  Conversely, emotions and an artistic focus are often eschewed for technical wankery, pseudo-intellectual concepts, and general soullessness.  Whenever I hear an album described as 'progressive rock', I get both excited and nervous, as the potential for both success and failure is massive.


Enter Biota.  Originally conceived as the art collective Mnemonists, Biota broke from this group to focus on making avant-prog with colorings from practically any and every traditional folk influence out there.  The group specializes in dense, heady pieces that swirl, bubble, and convulse rather than follow any specific structure.  Combining standard rock instrumentation with French accordion, gamelan, Hindustani, jazz, and other styles I’m too ignorant to know of, the result is almost psychedelic in the most disorienting way imaginable.  Sometimes composed, often times improvised, Biota seem to speak a language of color, moving from texture to texture with a keen attention to atmospheric detail.
Based on my pretension towards prog, I’ve just described either the most elaborate and creative band out there, or absolute drivel that barely holds itself up as pure kitsch.  On paper it’s impossible to tell which is the truth, but a listen to Invisible Map offers a case for the former.  Tracks like “The Rapid Color”, “Mineral”, and “Telegraph Plant” are exercises in crafting esoteric soundscapes, creating an ephemeral feel.  Meanwhile, more grounded tracks such as “Landless” and “Birthday” apply their slanted musical sensibility to pop structures and succeed masterfully.  Overall, each quick track works towards maintaining an intense yet breathtaking atmosphere that is quite unlike any other music.


What makes Invisible Map, as well as other Biota releases such as Object Holder, succeed is that their unique choice in structure and instrumentation never feels like a gimmick to appear cerebral.  Instead, this music genuinely feels as if it reflects the group’s own quirkiness and crooked view of reality.  Invisible Map ultimately succeeds because it’s the product of weird musicians placing concentrated self-expression above convoluted self-indulgence, whereas other progressive rock outfits do the opposite.