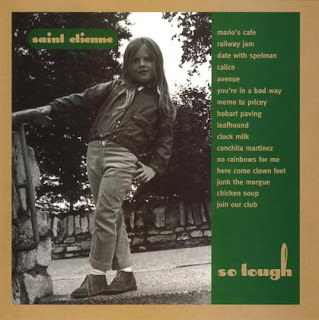 Saint Etienne's 1993 So Tough, though an inheritor of Eno's idea of what rock is and eighties synth-pop, is an achievement all on its own. The wandering free spirit of this band's second record is only a natural response to their first, Foxbase Alpha, a record in which house music met in graceful rejoice with indie pop. And yet, the difference between the two is well pronounced.


What was initially a concept album about inter-euro tourism (the first track would've marked a frequented English café as a starting point) turned into an almost exclusive britpop reaffirmation. This characteristic explains the gushy, watery, and cuddly traits of the song production and, almost in consequence of this, the songs' structures. That being said, one of the factors that really gives this album its remarkable cohesion, in opposition to the quality that a disconnected succession of songs would have, is the ludic use of pastiche samples. The most notable of these being the spontaneous fragments of British book-to-film adaptations, of which the majority could recognise Lord of the Flies and Wilde's The Picture of Dorian Gray -curiously, Saint Etienne opted for using the 1945 adaptation of this book, probably the only reworking of this book to actually dare show Dorian's picture-. These samples are symmetrically dispersed in a way that the album in its whole is relieved of any blank spots. Of course, the album's charm does not reside in the aspects that make its linearity but rather more in its authentic content.

Out of the sixteen total tracks of So Tough only eleven include the band's actual activity, the rest are samples that, as mentioned before, don't work as simple tedium breaks. Those songs are the canvas in which Saint Etienne is able to lay out their style in odd song forms that range from three to even seven minutes. And though in the given britpop context oddity seemed to have no place, this band did manage to establish their very own albeit limited counter-current. Mario's Cafe ,for starters, echoes the eighties cutey post-punk of Talulah Gosh in its lyrics -the common pastimes denoted in the microscopic prelude:"Cigarette, a cup of tea, a bun [...]", and the suburban post-college existentialism: "[...] Everyone's dreaming of all they've got to live for"- yet completely distances from it in its form: a gushy waterfallish rock and dance hybrid. All accompanied by a delightful variety of beats, dreamy backing vocals, and artful violin samples that give the piece collage-like effects; these elements constant throughout the album suggest originality and, more arguably, innovation.

Avenue, easily the most memorable and high hoped track, has an eagerness to melt into the listener's memory with its seemingly inarticulate chorus and bleak London sky backing that conserves the earlier D.I.Y. aesthetic. And so on, the album may retake house roots in Junk the Morgue and gradually progress to full on party haven on Join our Club, in which one may please a picture of a nineties A cup Euro girl sweaty at a disco.

In Robert Christgau's words, So Tough is "classic English not-rock with pretentions to not being pretentious". Wrapped with youthful spirit, this semi-dusted gem won't disappoint the listener nor will it be a mere aggregation to the roots it grew on.

link
Posted by Coopigat at 7:25 PM