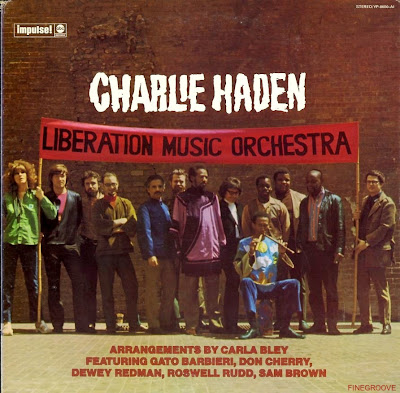 There are very few musicians that play for a cause as noble as liberty, and ever fewer are those that have managed to encrust strong purposes into music oh so correctly and imaginatively. Charlie Haden is a lotus in the grass that bursted in the name solemnity. By creating the large jazz ensemble Liberation Music Orchestra, Haden has consecrated such heroism into the history of jazz music and into the veins of creativity for "Liberation Music Orchestra" is not just another jazz record.


"Liberation Music Orchestra" is a caring album to say the least and I dare say that it is also an album with an aura of social conscience much like the controversially united Sam Rivers' "Streams" and Art Ensemble of Chicago's "Bap-Tizum". The album has an interesting political background to it. The tracks "El Quinto Regimiento", "Los Cuatro Generales" and "Vive La Quince Brigada" are all Spanish folk songs that were chanted during the Spanish Civil War in melody of liberty. "Song for Ché", dedicated to Che Guevara, stirred controversies in Portugal one year after the album's release. During Portugal's fascist dictatorship, it was played in dedication to the anticolonialist revolutionaries in various Portuguese colonies while Haden was on tour backing up Coleman. After such event Haden was viciously retained  by the Portuguese authorities. Thanks to such happening, Charlie Haden is now considered a minor hero in the Iberic country's political and musical circles. Needless to say, Haden is a politically outspoken musician in every sense of the title.

The album has a traditionally geometric structure much like a suite or a symphony. The first track "The Introduction" sets a rich marching pace to give way to imperative rhythms of "Song of the United Front" and then to the 3 parted Spanish folk songs suite. All the Spanish folk songs portrayed in the album are nicely adulterated to fit Carla Bley's and Charlie Haden's experimental big band ambitions, while "El Quinto Regimiento" is like a rambling horse, "Los Cuatro Generales" is penitence and hope replete with Charlie's distinct bass playing. The suite ends with the noisy jazz liberties of "Vive La Quince Brigada" which also serves as a perfect final point for such a daring suite. Later comes the controversially enigmatic "Song for Ché" that far from being another pierce of big-band free jazz is a gentle bass ballad that shows respect and honour to one of the biggest revolutionaries of all time. After a couple of tracks, one of them being Coleman's very own "War Orphans", follows "Circus '68 '69". Said track is easily the most dynamic of all the tracks that preceded it, in it both Haden's heavy string verses and Cherry's disconcerting playing morph together make "Liberation Music Orchestra" a more than memorable listen.

Whether it's the beautifully arranged compositions, the march-like brass playing, or the elegantly executed "We Shall Overcome", "Liberation Music Orchestra" is a fine edition to any jazz collections due to its dazzling musicality and its solemn background.