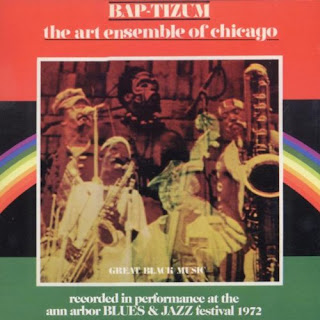 The Art Ensemble of Chicago is a jazz collective from, well, Chicago that rose to prominence at the latter half of the free jazz movement during the late 60s and early 70s.  Gaining prominence with their soundtrack for the French film Les Stances a Sophie, the ensemble went on to release BAP-TIZUM, a live recording from the Ann Arbor Blues and Jazz Festival in 1972.   While the group would go on to release many more albums over the next few decades, and though they are still active to this day, BAP-TIZUM still stands as one of their crowning achievements:  a vibrant recording that still sounds fresh and inventive today.


After a brief introduction, the album begins with “Nfamoudou-boudougou”, a tribal percussion track that aggressively builds to its end.   “Immm” revolves around the incantation of “IMMM” on vocals passed from member to member.  All the while, signature Art Ensemble percussion of gongs, bells, shakers, vibraphones, congas, and full drum sets fill the gaps in sound.  Along with accouterments like whistles and horns filling the empty spaces, a shrieking vocal solo in the center becomes the focal point of the track.  Shifting from tribal incantations to free form wailing to a cool swing, this solo perfectly describes how the group spans various styles of music like swing, African tribalism, and free jazz.

“Unanka” begins with foreboding long tones on horns and eventually opens up into a lovely time-stopping horn choir.  It is the first time the groups sounds truly ‘jazzy’ as an excellent sax solo patiently talks with the hazy bassline.  “Oouffnoon” is a trumpet fanfare led by Bowie.  Framed with tribal percussion, the track eventually devolves into a screeching interplay between sax and trumpet, flexing the capabilities of the ensemble as a free jazz outfit.

“Ohnedaruth” opens with a Bowie trumpet call, then breaks down to a hard bop rout and devolves into a loose free jazz collective improvisation.  Throughout the entire track, the group’s signature percussion is used effectively as bells, vibraphones, tom toms, congas, and full drum sets create a fervent atmosphere.  Finally, “Odwalla” closes out the set with a more conventional swing chart that serves as poignant nod to the predecessors as well as a template for their future experimentations.

The ensemble has an uncanny ability to blend various genres of music into one cohesive, inventive sound.  Swing, tribalism, free jazz, and blues elements fit snugly next to one another through a whirlwind of music.  However, never does the group’s travelogue of styles and genres seem stale and academic; every moment on BAP-TIZUM is a visceral, energetic joyride that can excite any listener.  This is what makes the Art Ensemble of Chicago such a force in the avant-garde jazz world—that their complex, multifaceted musical language comes so naturally to its members.  The vivacity and sheer musicianship on BAP-TIZUM makes it one of the most uniquely entertaining and thought-provoking pieces of music out there, and anyone with a remote interest in jazz owes it to themselves to give it a spin.